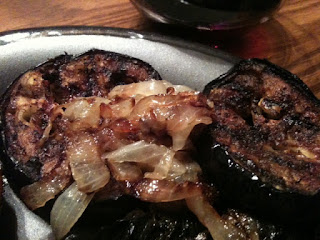 This was just awesome. Easy as can be and while delightfully colorful before the grilling, it all turned a lovely brown after the fact.

In the picture all you can really see are two eggplant slices under a mountain of onion, but aren't they gorgeous!

The nutrition is excellent even with the oil. Bastes and marinades are difficult to measure for nutrition because so much does not get consumed. I did my best to guestimate how much would actually be on the veggies when they were done cooking.

To make this all you need besides the ingredients is a husband that loves to grill, about five minutes of your own time, and about 20 of his.

Mix up a great baste with:

1 eggplant
4 yellow squash (you could use green squash or thick slices of onion if you prefer!)
4 portobello mushrooms

Slice up the eggplant into 1/2 inch or so thick rounds (cut off the ends a bit first). Slice the yellow squash either vertically or horizontally in the same way depending on if you are using one of those little grill tools that captures the smaller veggies (horizontal cuts) or if you are going to lay them on the coals and need them a bit bigger (lengthwise cuts).. or if you want, you can put them in double foil packets and cut them any old size you want, but you won't get the same grill marks that way.

Yes. Leave the skin on the eggplant if you like. It all depends on you taste. Some people do not like how the skin is a bit tougher than the rest of the veggie. If that is you, then peel it before slicing. Then it will be all melt in your mouth tenderness... but you will have cut off a lot of nutrition. Your call.

Immediately after cutting the veggies, brush the baste both sides of each piece.

Grill for 15-20 minutes or until the veggies are cooked to your preference. Some like them more crispy, some like them soft. You do it your way.

Enjoy mindfully with some lovely caramelized onions like I did in the pic above. I didn't give the husband the onions to grill. I did them inside on the stove... I do rather love caramelizing onions and part of the fun is making twice as many as need be so I can taste them to make sure they are cooking right. Can't do that on a grill. :D