Yes, Grilled Provolone. What more noble offering for an unsettled world as it sits down at the communal table to discuss cheese and peace.

My husband returned from a business trip to Argentina and apparently this is a common dish there - but they call it Provoleta. I simply had to have some. But, how on earth do you grill cheese without it just melting all through the grates of the grill? I tooled all over the interwebz in search of methods and recipes. Most of them just looked too dratted hard - lots of admonishments about it being a skill that needs practice, critical timing, predictions about the ruination of many a fine cheese, and all that kind of stuff. One blog said that if you give up, you can put the cheese in a little aluminum pan and "grill" it in that, but then you won't get the nice grill marks. So far, this recipe was not sounding particularly peaceful to prepare. I knew the calories would not be peaceful, but here they are with my best guess for portion and oil consumption.

Then I saw this video by Food Network's Michael Chiarello. In it, he provided the two missing links - 1) most of the recipes simply used cheese that was cut too thin for the average non-professional cheese griller to handle and 2) you need to finish it in a casserole on the grill. How awesome is that! You get the grill marks, the ooey gooey brie like consistency, the smokey goodness, and you don't decorate the coals with cheese! Peace through cheese was starting to look quite possible.

One nice thing about using the casserole dish after charring the outside was that the marinade stayed in the casserole instead of all going down the grates to the coals. Those of a more slender nature that were not afraid of a little extra olive oil, got to re-dip their cheese and chunks of chewy bread into the seasoned cheese drippings for even more awesome flavor...ok, everyone did that.

Now, my pic to the right below is not the best of pics as we had been eating on it, scraping off the grilled bits, and having fun swirling the cheesy strings all over the top, but you get the idea. I promise to do a better job of getting a snazzy pic next time - one that shows the grill marks and has not been eaten on nor peacefully played with.

And now, your ingredients: 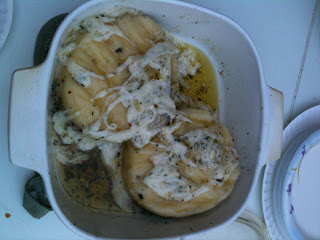 Have the deli guy or gal cut you one 2" inch thick slice of the best provolone that they carry - I used a fantastic aged provolone and it was worth every bit of the extra money. At least two hours before you head outside to light the coals, let the cheese sit out on a cutting board uncovered so the outside gets good and dry. According to the video, this helps keep it from immediately turning to runny cheese and melding with your coals.

One loaf Ciabatta bread sliced it in half horizontally and kept at the ready to be grilled.

If the marinade looks too sparsely populated with herbs, you can always add more fresh oregano and parsley.

Remember, seasonings are not exact measurements in a dish like this. If you love one thing more than the other please feel free to change them up. This recipe does give you a great start though.

What you do next:

Light the coals - concentrate the coals because you want them to be very hot.

Rub the marinade all over the provolone slices, pressing the seasonings in a tad so they stick a bit. Set the cheese in the casserole to sit and await its turn on the coals. If there's extra marinade, just pour it on the top unless you are persnickety about fat, but then if you are that way you are not likely to be reading this far so, just pour the extra oil over the cheese in the casserole dish.

While you are waiting for the coals to be ready, open a nice bottle of Malbec wine. It's the perfect Argentinian wine pairing for the cheese. Go ahead and have a glass so you can get that peaceful feeling started.

When the grill is hot, remove the grates, spray them with Pam, and return it to its position over the coals.

Now, this is the tricky part. Using long tongs, place the cheese on top of the grill. It only takes a minute or two to sear the outside. The cheese will start to melt a little, so don't let it sit long. Quickly turn it only one time and cook another minute or two in order to char that side. Precise timing is impossible for me to say because it all depends on the temperature of your coals. Just do not get sidetracked or go inside to answer the phone or anything.

Then put the cheese in the casserole that it had been sitting in before and place that on the grill uncovered. Cover the grates with the lid from the grill. After about 3 minutes, open the lid and put the bread on the grill, cut side down. Grill for a couple minutes with the lid back on. Flip the bread and grill the other side. Remove both the cheese and bread and serve. If the cheese looks too melty before the bread is done, remove it. Ours turned out sort of like the provolone version of hot brie and I thought it was perfect. It would still be good either over done or under done. It's also awesome the next day toasted on bread for sandwiches.

Serve it to your friends at a casual table with several spoons or knives handy so everyone can scoop or slice cheese as they wish and spread it on the bread (just tear off hunks of that). Season the atmosphere with some more Malbec.

Now sit back and listen to the absolutely peace-filled sounds of friends eating together. It is with great pride and pleasure that I Declare World Peace.
TO USE THE NEW PRINT BUTTON click on the title of the recipe so that it opens on its own page and then click the Button, you can edit the page and print only what you want