When I started making the original of this recipe (from the July/August 2012 Vegetarian Times hard copy magazine, Go buy it. It's a great issue!), I was only going to change just a few things. Truly. I wanted more of the pretty little yellow squashes for sure. More cheese. Definitely more garlic. Maybe fewer tomatoes... ok, and they wouldn't all be cherry because what I've got now is one purplish beefsteak, four cherry tomatoes, and a mountain of yellow tomatoes. So, I set to work chopping and being as mindful as all get out. 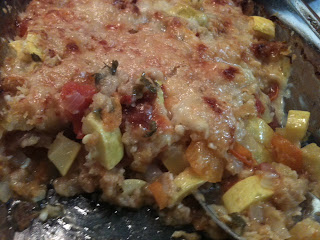 Then we had an incredible, albeit brief, storm and a power out. An hour and a half later, I was rushing through what was supposed to be a leisurely mindful cookery time and was, well, not mindful at all. I did everything right until I got to the part where the veggies are hot, and instead of making layers, I mixed the whole thing together.

So, I thought, Panko! Yes, I sprinkled Panko on top of a casserole that already had fresh torn bread in the mix, bread that I had faithfully drizzled with melted butter because it was going to be a crispy crumbly topping, only it wasn't anymore.

The result was pretty dratted awesome. Reminded me of a layered butternut squash casserole I make where the breadcrumbs are in fact layered with the rest. *makes note to add tomatoes to that casserole*

4 T butter*
3 slices whole grain bread, torn into bits
1/4 cup parsley, chopped
fresh cracked black pepper to taste
1/2 an onion, chopped
1 pound yellow summer squash, chopped
2 cups tomatoes fresh picked from the garden, a variety of colors and types, chopped
2 T garlic, chopped - the pre-chopped in a jar kind as I was running out of time and I always use more of that as it doesn't have as strong a flavor as fresh garlic.
1/2 cup Panko
8 oz Gruyere cheese, shredded

Preheat the oven to 400F

Put the bread and parsley in a large bowl. Sprinkle with black pepper.

In a large pan, heat the butter over medium heat until it is all melty. Drizzle about half of that on top of the bread and parsley.

Now, here's where I went deliciously wrong. Add the hot veggie mixture to the bowl with the breadcrumbs and toss. Then spread evenly in the pan.

Sprinkle with Panko, then with the Gruyere.

Bake for about 30 minutes or until everything is all bubbly and the cheese is turning a delicious brown. There is nothing in the world quite as ready for mindfulness as browning cheese. Enjoy the aroma.

Remove from the oven and let it sit a few minutes. Enjoy as mindfully as possible.

We decided that either mushrooms or sweet red pepper or even banana peppers would be good in this dish. I'm going to go the banana pepper route next time. I nuked up a bowl for lunch the next day and added some hot ground red pepper flakes. That was awesome too and may be a pre-bake addition if I know everyone at the table enjoys a bit of a kick to their food.

*if you are vegetarian, do not substitute 4 T of oil. The butter is there for a reason in the drizzling part. It's what would have, if I had been mindful anyway, crisped up the non-existent topping. Now, if you want to skip the butter, use just 1 T olive oil to saute your veggies and do not bother drizzling any on your torn bread. You are just going to dump it in with the juicy veggies anyway and it will not have time to crisp, so no worries.