Do Not Ever Salt the Eggplant Parmigiana

Sometimes we do a thing the way we've always done it just because, well, that's the way we've always done it. That doesn't make it right, it just makes it a habit. Lots of us have the habit of salting eggplant to draw out the moisture and then rinsing the salt before prepping it for Eggplant Parmigiana. Today, I discovered that the practice of salting the eggplant (actually called degorging....doesn't that sound unpleasant) is not the traditional and proper way to work with eggplant, it's just a modern habit. Also discovered that I was slicing the eggplant all wrong! So, with those two lessons (plus one other) from Benny the Chef, using the recipe from his wonderful new cookery book as a starting point, adding a few of my own preferences and inserting one convenient item that would appall Benny, I made the following fabulous sweet not bitter at all Parmigiana. 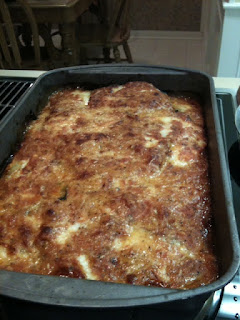 Do Not Ever Salt the Eggplant Parmigiana

(a rather Americanized version of the Roman classic. If you want to see how Benny made it, Like him on Facebook and you can see a series of pictures where he makes this in the totally Roman way!)

Serves 6-10 depending upon if it is the main dish or a side veggie or what you consider a serving. Here's the nutrition facts on the recipe based on 8 side servings which are very interestingly good given the fact that I allowed for a full 1/4 cup of oil to be absorbed and that there is a ton of cheese! But then, the eggplant itself only adds 49 calories to each serving. What a Mindful Win!

My Ingredients and my apologies to great chefs like Benny along with an accompanying warning:

3 young eggplants with firm skin and a beautiful green stem
2 cloves of garlic skin on
Grape seed oil for frying
16 oz fresh mozzarella
*****1 (24 oz jar) of Newman's Own Roasted Tomato and Roasted Garlic Pasta Sauce (I'm sorry, Benny, really I usually would make fresh sauce, but this time I was in such a hurry... and I have to admit, mine would be a little different from yours anyway, oh dear, I'm in big trouble now...)
2 eggs
3 cloves of garlic minced (or pressed if you have one of those presses and don't have arthritic hands which makes it dratted difficult to do) and added to the sauce because I LOVE garlic
a T of brown sugar because I had never used this brand of sauce before and it was a tad acidic
a big handful of fresh picked basil from my garden - both purple and green
4 oz Parmigiano Reggiano

*****warning, because I ran out of time and tomatoes and did not make my homemade sauce, I consider this recipe unfinished but adequate, although I do know that even if I put my sauce in here many of you would use a jar anyway so I'll post some of my sauce recipes separately.

The first thing I learned was how much oil to use. Benny uses 2 cups of extra virgin olive oil to bathe them in deep oil. He has far better fry pans than I, and is more skilled, knowing just when it's hot enough to cook the eggplant and not burn the oil. Besides (yes, I always have excuses) I had a mental block with using excess oil so instead I experimented. In one batch I hot bathed the eggplant in 2 cups of oil seasoned by adding the two skin on garlic cloves. I found that those slices were a just a tiny tad greasy and had to press them repeatedly with paper towels. I really think it was not all my fault, it's because I need to get one of those 2.5mm copper fry pans and besides, my stove is having even heat distribution issues (see? many many excuses!). For the second batch of slices, I used enough oil to coat the pan well, seasoned it by adding two more garlic cloves skin on, and quick fried the eggplant slices in batches to a beautiful golden brown. Still had to press between paper towels, but only briefly. Both ways of frying worked. One just used more paper towels and more oil. So, until I get a better fry pan and a new stove, I learned that I must use less oil. 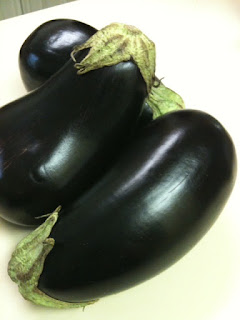 The second thing I learned is that one should never cut the eggplant into slices while laying it on its side. Cut off the ends and stand it up to make the slices. The reason for this is that it changes the way the flesh presents and makes it less inclined to soak up all the oil when it fries. Slice off one slice of skin and discard. Then make 1/2 inch slices without peeling so that all your slices have a bit of skin around the edges.

The third thing I learned was that you MUST fry the slices right away after they are cut to a point of being golden brown and that this will help make them not bitter and soggy. After frying, remove them to a paper towel and blot well. I sliced one eggplant at a time and fried.

What to do to get it all ready for the pan:

After the frying, slice the mozzarella and put it on a handy dandy plate, rinse some fresh picked basil leaves, and dry them off. If you don't grow basil, do give it a try. It is such a simple forgiving plant to grow and nothing is better than heading out to the garden for fresh basil.

Next, mix the eggs with the the Pecorino Romano and 3 oz of the Parmigiano Romano (reserve one oz for topping). Warm the sauce in a medium sized pot.

Stir the egg/cheese mixture in to the warmed tomato sauce. Stir quickly to incorporate the eggs before they curdle.

Now you should have assembled the following on plates, a pot, and few bowls:

golden brown eggplant, thick sauce, basil leaves, and pepper....I did not use additional salt. I rarely add salt, but if you are used to it you may have to use it here as you layer ingredients. I will avert my eyes as you do so.

In a large baking dish spread some of the tomato sauce on the bottom (no, I did not treat the pan w/Pam or anything else), top with a layer of eggplant (add salt if you must use it), grate some pepper over it, add a few whole basil leaves, and top with chunks of mozzarella. Then, repeat until you run out of everything but the sauce and spread that on top and sprinkle with the Parmigiano Reggiano. In this large 8 x 11 pan, I had three layers. I also like my Parmigiana rather saucy. In Benny's recipe the delectable sweet eggplant is quite obviously the star of the dish!

Bake at 400 F for 40 minutes, raise the temp to 500 F and bake until the Parmigiana is browned. While waiting, make salads. If you are making pasta, start the water a little before the Parmigiana is done so that the pasta can cook while the eggplant sits a bit.

Let the beautiful Parmigiana rest for 10 minutes, it is hard work to change from a purple skinned plant to a layered work of art. Enjoy it mindfully with a small side of whole wheat pasta seasoned only with your best extra virgin olive oil, garlic, fresh cracked black pepper, and well browned mushroom slices. A beautiful salad of mixed greens with carrot bits rounds the meal out perfectly.
TO USE THE NEW PRINT BUTTON click on the title of the recipe so that it opens on its own page and then click the Button, you can edit the page and print only what you want