Chicken Stew is one of my new faves. I've been making Aline's Cajun version (here at Mindful) for a while, but recently tried a more standard Central USA version...well, I did make a few changes cuz that's what I do. Just can't stop changing spices or in this case the entire finish and presentation. Here's a link to the original version by Rachel Bilson, I'm sure it's great as is too. 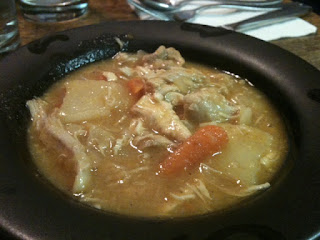 I began my changes with subbing in white wine for the dry sherry, not because I thought it would taste better but because it was Sunday in Houston and that meant that I could not buy any sherry. If I had cognac in the house I would have used that instead because I'm not a sherry fan...I'm not a cognac fan either, but I think I don't mind that as much. We always drink the red kind of wine so I still had to go out and buy a bottle of white (after trying to buy the sherry and finding out that they would not sell it to me).

Also, I like smokey paprika best and used some of that in addition to the amount of regular paprika, as always, no salt was added. Then I thought, you know, this dish is awfully Tan. Tan potatoes. Tan chicken. Tan stock. Tan everything. So, I added carrots. Peas would have been ok, but I wanted carrots. Green beans would have worked too. All three would do if you didn't have enough chicken...or did not want chicken.

Finally, I changed how the dish was finished. Her presentation reminded me of a layered dish that my parents love to make which keeps all the slices of veggies unchanged in shape from start to finish. She also left the chicken pieces whole. I wanted more of a stew to eat with a piece of bread and a spoon as I do not like messing with picking out whole chicken pieces that need to be edited with knife and fork from a stew.  So I did two more things to change it - 1) I stirred a little more vigorously so that the veggies became less uniform and 2) after 3/4 of the cooking time, I removed the chicken and skinned and deboned it, chopped the meat and returned it to the pot...and added a bit more stock.

this is what I ended up with. Is that not lovely?!

For Rachel Bilson's version, click on the link above. For mine, here ya go:

2 bone in skin on chicken breasts
6 bone in skin on chicken thighs
1/4 cup flour
quite a few turns of the pepper grinder
2 T butter
2 cups baby carrots - slice lengthwise, if the baby carrot is a fat one, slice each half in half so you have big sized matchsticks
3/4 of a very large sweet onion sliced as thin as you can - I'd have used more, but my son was home for dinner and he is one of those strange people that does not care for onion
4 large red potatoes, roughly peeled and sliced thin - I probably did them about 1/4 inch thick, I prefer red potatoes as I think the more firm less starchy potato improves the flavor and texture of this dish.
3/4 cup fresh grated Pecorino Romano cheese - don't buy pre-grated stuff unless you know it was done that day. I added some more not long before serving too, sp add as much cheese as you like.
1 T paprika
2 t smoky paprika
lots more turns of the pepper grinder
1 cup white wine
1 1/2 cup chicken stock (I like Kitchen Basics low sodium)
a few extra splashes of stock near the end of cookery

Ok, some of the how I did the cookery is above, so here's the abbreviated version:

Get out a very large pot with a lid and put your butter in it awaiting orders to brown the chicken.

Mix the flour and pepper and dredge the chicken so that each side is lightly floured - DO NOT EVER RINSE CHICKEN or any other meat for that matter. If you think it's "dirty" wipe it with a paper towel, but rinsing is not good for the flavor of the meat and it's a great way to make sure salmonella gets on the counter and in the sink. The cooking will kill it so why not just put all the salmonella in the pot and simmer it until dead?

Put the dredged chicken on a plate. Melt the butter over medium heat in the pot and then brown the chicken in batches - don't crowd the meat or it will not brown well. When you are done browning, drain the excess fat and return the chicken to the pot.

Toss in the carrots on top of the chicken, toss the potatoes on that, toss the onions on top of that, add in both kinds of paprika and a bunch of black pepper. Add the wine (and the more I think about it, I think cognac will be an improvement) and stock, bring to a simmer and cover. Stir every now and then so it doesn't stick on the bottom of the pot and to break up the veggies a bit as you near the end of cookery.

After an hour and a half, remove the chicken (and any loose floating skin and bones). Remove the meat from the pieces, chop, and return to the pot. As you stir, decide if you want more stock or if you like it super thick and act accordingly. Cover and simmer another 15 minutes or until you are ready to serve dinner.

Outstandingly mindful with a hunk of rustic whole wheat bread!
TO USE THE NEW PRINT BUTTON click on the title of the recipe so that it opens on its own page and then click the Button, you can edit the page and print only what you want