My Grandmother came over from Sweden when she was a young teenager. Life was amazingly difficult for them here, but it sure beat living in a barn and using a cave as a refrigerator in Sweden. Because of her I got to taste a great many Swedish foods such as the glorious potato sausage and the most wonderful Limpa Bread. I never tried making the sausage, but I do make a variation on her meatballs...a very off the mark variation because I never did want to cook when young and failed to secure the proper recipe. :(

This is comfort food, not diet food - unless you want to make it a side dish as then it is just fine no matter that you are trying to reduce a bit. We don't have it often and when we do, it's the star on the plate. If you like to know calories and nutrition, click here. I hope you enjoy this Americanized version of a tasty dish. 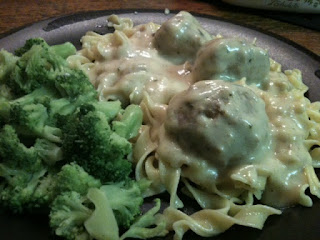 Spectacular Almost (but not quite) Swedish Meatballs

1 cup soft whole wheat bread crumbs - do not use the dried crumbs of stuff that comes in cans, tear into some fresh whole wheat bread and make tiny pieces (you can always pretend the bread is someone you are not fond of)
2/3 cup milk - you can use low fat or whole or 2% or whatever you prefer
1 pound ground beef - I prefer grass fed organic beef because nothing beats it for flavor
1 egg

2 t onion minced very tiny
1/4 t mace
1/8 t allspice
1/4 or so t pepper
2 T butter
2 T flour
1 can condensed cream of celery soup - a low sodium one is what I use, but you use what you prefer
1 cup white wine - any good white wine you like, never ever cook with wine you would not drink
1/2 cup - 2/3 cups undiluted evaporated milk
2 T or so chopped fresh parsley

Directions with Suggestions and a few Warnings:

Soak the torn bread in a bowl with milk for about 5 minutes or so. Add beef, egg, onion, mace, allspice, pepper, and mix thoroughly with your hands. Moisten your hands with a bit of water and shape the meat into balls about the size of a walnut. Traditionally you pan brown these in butter, but I find the mix too juicy so bake them instead. If you use a lot more bread or less milk you might get away with browning them in butter. If you want to try browning in butter be prepared to not have meatballs. Instead you will have meat ovals, meat trapezoids, meat rectangles, and meat pancakes...well, that's what happens to me anyway.

Spray a baking pan with Pam and add the meatballs. Bake for about 20 minutes or so until they start to brown. Remove to a plate. If there are nice brown bits in the pan, deglaze it with about 1/4 cup of the wine and add it to the gravy a couple paragraphs later on. Now before you get that deglazing look in your eye, I want you to stop and look at the pan now empty of meatballs. If it was fatty, you will need to drain off much of the fat before you deglaze. Deglazing btw is just adding some liquid to the hot pan and scraping up all the delicious browned bits. You don't want to add an excess of fat, just the browned bits, so drain before deglazing. If you didn't bake them long enough, you might not have brown bits, so just skip the deglazing. It will still be good.

Over medium heat melt the butter, then add the flour and stir til well blended. Do not allow to be unattended or it will burn. Stir constantly.

Add the soup, wine, evaporated milk, the deglazed drippings if you have that and cook over medium, continuing to stir constantly until the mixture is nice and thick and smooth. Add the parsley and more pepper to taste and if you are a salter I will not look while you stick more in there, but really why? The soup has more than enough salt already and surely you don't want your arteries to harden too soon so knock it off with the salt already.

Add the meatballs back to the gravy, cover, and simmer for about 20 minutes - sir every now and then.

While it's simmering, cook up some medium egg noodles per package directions - I like mine a tad firm to tooth just like pasta and usually don't quite cook them as long as directed. Mix a pat or five of butter in the cooked and drained noodles so they don't stick - or use extra virgin olive oil as you prefer.

Serve by using the meatballs and gravy as a topping for the noodles. Very mindful with a delicious large salad and a big side of broccoli. Satisfyingly comforting food.
TO USE THE NEW PRINT BUTTON click on the title of the recipe so that it opens on its own page and then click the Button, you can edit the page and print only what you want