Yes, I know you can go to the store and get pre-made pie crusts - and yes, they are a great thing for working people. Nice to be able to make an almost homemade pie when you don't have time for a completely homemade pie. Wouldn't surprise me if a lot of young people have never tasted an actual home made pie crust and I think that is a shame. Really doesn't take that much time and it tastes so much better. Far more of a mindfully pie experience. 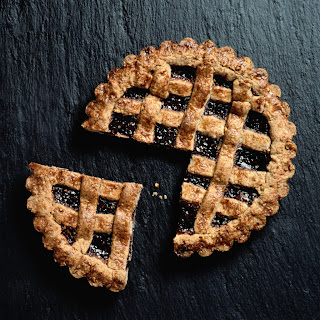 Here's my recipe for a double pie crust that has never failed me:

Mix together the flour and salt. Then cut in the shortening with a fork continuing until you have a nice coarse meal appearance. Under cutting is one reason a pie crust or for that matter a baking powder biscuit will fail. So do this mindfully and well.

In a separate bowl, beat the egg, vinegar and water with a fork. Add it to the four mixture and blend thoroughly.

Press into two balls and allow to rest for about five minutes.

Then using a rolling pin and a clean well floured surface, press one ball fairly flat and as circular as you can. I like my Tupperware surface which has circles in the design for you to follow as a sizing guide. Wax paper will do in a pinch, just invert the pan over it periodically to find out if you've rolled it out enough. Sprinkle liberally with flour and roll from the center to an edge, turn about 1/4 of the way, repeat, in fact, repeat the entire thing repeatedly (:D) until the circle is large enough to overhand the edges of your pie pan.

Carefully lift onto your pan gently press so there's no trapped air underneath. If there are places that were too thin, just remove a hunk of the overhanging crust, lightly dampen the piece with water and press into the offending area.

Prepare the top crust in the same way. After you add your pie filling, top, crimp the edges together with your fingers, cut off the excess crust, and finally make some decorative yet functional air ways for steam to escape with a very sharp knife.

You can get fancy and cut the top crust into 1/2 inch long slices and weave a basket looking design on the top - pretty and very festive for a holiday gathering.

Fill it with whatever pie filling you like. I really like this crust for apple pie. Or, use the crusts for two pumpkin or other open top pies.

One taste and you'll be hooked and unable to eat those un-mindful prepared crusts...well, at least you'll know the difference.
TO USE THE NEW PRINT BUTTON click on the title of the recipe so that it opens on its own page and then click the Button, you can edit the page and print only what you want