So, my daughter wanted me to blog my most requested Thanksgiving side dish...well except for the five layer butterflake rolls. I thought I had done so already and performed a quick google for Leggett Corn - named by my son after my Dad's corn raising and eating side of the family. I was most surprised when up popped a few recipes from bloggers that had the nerve to post recipes called Leggett Corn - and that no, I had not blogged it. So, appalled at the potential besmirching of my maiden name with recipes that could never be the most wonderful of all forms of corn deliciousness I checked the recipes out. They were so very near to my own cherished family "recipe" that I wondered if, in fact these were relatives. But, due to the use of Profile Names there was no way to verify that. I will proceed here on the assumption that there could be some confusion out there on how The Real Leggett Corn is made and thus entitle the dish and this blog accordingly. 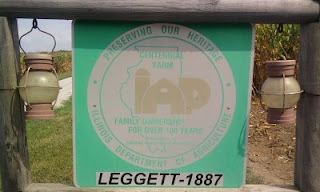 This sign proves that I am in fact an original Leggett - please note that this Illinois farm was certified in 1987 by the Governor himself as a Century Farm - a farm owned and operated by the same family for 100 years. As my Uncle and Cousin still farm there, we are well into our second century.

My Leggetts go back to pre-Constitutional America. Thus, I win the right to name and own the recipe for Leggett Corn. *neener neener, as they say* 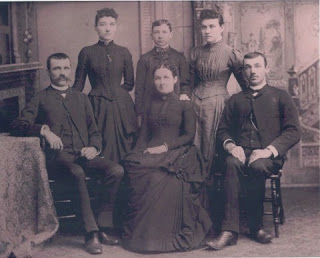 Here's some of the Leggetts that made the Original and Real Leggett Corn.

They don't look too happy. Perhaps they heard about all this upstart Leggett Corn stuff going on and available over the internet for anyone that does not know better.

Well, as a dutiful descendent, I am about to set the record straight.

I present to you, The Real Leggett Corn (TM) in all its rich complexity.

2 large cans of Green Giant creamed corn
1 small can of the Niblets extra sweet corn
A lot of Premium Saltine Crackers all crumbled up by hand just like the people above did - do not use any labor saving devices or it will not be Real Leggett Corn.
Milk - NOT skim
pepper
paprika - only if you are having guests for a formal eating party that uses real plates and need to fancy it up.

Difficult to follow instructions, but for the dish to work please perform all steps with precision:

Dump the creamed corn and drained regular corn into a bowl. Stir in crumbled crackers until it's real thick.

Thin a bit with milk and then add more crackers and keep this up until the crackers are absorbing the milk and the mixture looks kind of like a thick pudding of corn. Sorry, but there are no measurements. This is an intuitive recipe and you just go on adding crackers and milk til it looks dratted good. Sprinkle in some pepper once you've got a nice texture that is not too thin - here is where I will diverge from the original a tad because I do not add more salt but please don't tell the Victorian Leggetts that.

Pour into a buttered casserole dish and sprinkle a nice layer of crumbled crackers over the top.

Sprinkle paprika over crackers if formal dining is to be had.

Bake at 375 until the crumbs are just starting to brown and the whole is a bit bubbly.

you really can over bake the dish, so just slightly browned, ok? Maybe 25 minutes or so.

If you are eating this and interested in calories, you can find a reasonable estimate using low fat milk here.

Email ThisBlogThis!Share to TwitterShare to FacebookShare to Pinterest
Labels: corn, Side Dish, Vegetable