Why on earth do you add salt to boiling pasta water? 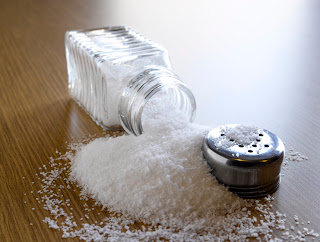 Ok, in the post on Pepperoni Pasta, I told you to add salt to the water that you were bringing to a boil for the pasta. I admitted that I had not a single clue as to why but that you were to do so anyway.

Well, one thing about me is that I really do not like Not Knowing Stuff. So I searched the interwebz for the answer. Turns out there are two. Answers that is.

Answer #1 - because a little of the salt is absorbed into the pasta and it enhances the flavor. I am glad it's just a little because I really do not like to salt my food unless it's absolutely necessary.

Answer #2 - this is the more interesting answer because it means I have learned a Scientific Fact! Salt actually increases the boiling point of water which means that when you stick the pasta in there the water is hotter and it cooks faster which is dratted good for the flour and such.

Debunking Answer #2 - unfortunately, you would have to add so much salt to the pot to raise the temperature, the pasta would be most inedible. Here's a link where it is all explained for you with links to actual science and math.

Thus the winner is Answer #1. Salting enhances the flavor of the pasta. But, remember, if you are one of those that uses the pasta water in your sauce (I do that for some sauces), don't add too much salt. I think this is going to have to be one of those "to taste" things.

The next time I am feeling brave, I will boil two pots of water, one with salt and one without. Then there will be a taste comparison by the professional eaters that reside within my home. So, one of these days (not this weekend as I am going on a trip), I'll talk about the results and let you know if it really is important to salt the pasta water.

This sounds like one of those things that will start a Culinary War.
TO USE THE NEW PRINT BUTTON click on the title of the recipe so that it opens on its own page and then click the Button, you can edit the page and print only what you want

Email ThisBlogThis!Share to TwitterShare to FacebookShare to Pinterest
Labels: Why?