Who says you have to stuff a boring green bell pepper? 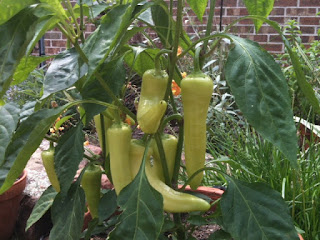 The pic to the right is just one of my quite prolific banana pepper plants. Obviously something had to be done. They were absolutely huge and looked quite roomy inside, so....

I decided to make Stuffed and Grilled Banana Peppers and serve them with my grilled fajitas!

I ran the nutrition for you at Calorie Count (assuming you are not using the optional items this should be quite accurate).

Some Assembly Required, Please Double Check your Ingredients to Avoid Mad Dashes to the Store:

Completely and Totally Optional Ideas that are in no Way to Be Considered All Inclusive:

Option 1: Thick slices of applewood bacon to wrap around the peppers before grilling. Now, bacon is not really necessary at all. I used bacon when I made this batch though. If you have carnivores over for dinner they will be impressed with bacon.

If you want this to stay mindful or are simply not a carnivore, then do not add the bacon.

If not using bacon, take care to make sure the pepper is stuffed only to the point where the slits (see directions below) can be closed with the toothpicks...or instead of making a T slit, cut off only the top only, deseed, stuff, and attach the top with toothpicks to prevent the insides from leaking all over the grill. Then, simply rub a bit of olive oil around the pepper before grilling. The pretty charred pepper bits are very tasty. Next time I make it, I'll make it with no bacon and post pics so you can see the difference... I still have several dozen peppers growing on the plants and will have to do something with them!

Option 3: *I made a larger amount of rice (increasing the seasonings of course) and served what did not go inside the peppers as a side dish. Delicious.

How to Stuff a Pepper and the Geometry of an Incising Said Pepper Prior to the Stuffery:

While the rice is cooking, measure and prep the rest of the ingredients.  Caramelize the onion in the olive oil. To prep the peppers, do not cut all the way through - instead carefully slice a T shape opening only on one side. The horizontal cut should be up near the stem area and the vertical should extend from the center of that down as far as you want to go on the pepper. Gently open the T as if it were a buttoned shirt and use a small spoon to remove any seeds.

What to do Next along with a Few Comments on the Optional Nature of Bacon and Other Elements Worth Noting:

When the rice is done, mix it together with every ingredient except the peppers. Taste and adjust the seasonings.

Carefully spoon the rice into the cavity of each pepper...ok, give up on the careful part and just use your fingers and smush it in. I put a spoonful in the wider top and then used my fingers to push it to the small end of the pepper...a most messy and rather fun thing to do.

Secure each pepper with several toothpicks so the stuffing does not fall out onto the coals - or wrap with bacon and secure with two toothpicks.

You can make the peppers to this point earlier in the day and put them on a plate, cover with plastic wrap, refrigerate, and grill later - just pull them out of the fridge about a half an hour or so before grilling so they have time to come to room temperature.

Grill over hot coals, turning frequently until they are lovely and brown and well heated. The longer you cook, the softer the pepper will get, so don't stop too soon - approximately 12 minutes or so.

Post Script with Declamatory Sentences and Pronouncements of Various Sorts:

If you love the flavor of this dish but don't want to grill or cannot grill because your grill is still covered with snow, saute the peppers with the onions and add them to the rice, omit the cheese (or use it for garnish). and enjoy the flavors as a terrific side dish!

Fresh from your very own organic garden peppers is the tastiest way to go, but if you do not have a garden, I strongly encourage you to buy Certified Organic produce instead of conventional.

For me, organic is worth the price for three reasons - 1) there are a number of studies that show that the nutrition of organic produce is generally higher - and never lower - than conventional (likely because organic farmers are more concerned about the product instead of a "value added" price that extends the profit margin and shelf life); 2) I don't have to eat non-mindful chemicals with my food, and 3) the sustainability issue matters. It's important to me that what I buy reflects my respect for our planet which I value more than a dollar here or there. I'd rather save money in other areas of my life so I can support on good sustainable produce..
TO USE THE NEW PRINT BUTTON click on the title of the recipe so that it opens on its own page and then click the Button, you can edit the page and print only what you want