What do you get when your garden has the following pepper plants?

Interestingly enough, it is not easy to get people to accept care packages of the habaneros... lovely things though they are ... and they are most beautiful. Everyone wants the sweet banana peppers.

So, most of the hot peppers are getting rinsed, dried, and stuffed inside a freezer bag where they now take up about half of my freezers acreage. We had to do something with them so I made some hot pepper vinegar! It's easy and you can use it on any food you would sprinkle with Tabasco. There is simply no need to make bunches of the stuff unless you plan to gift people with these with the understanding that most will not ever sample the goodness, but will instead place them in the kitchen as a decorative item.

What you need to get:

2 clear glass oil and vinegar containers that have a nice seal or can be capped (thought nice canning jars are fine, but they are so wide mouthed it would be difficult to get just a dribble at a time)
about two cups or so of white distilled vinegar
a bunch of hot peppers in a variety of colors
cloves of garlic
a pair of thin cheap disposable gloves
a funnel 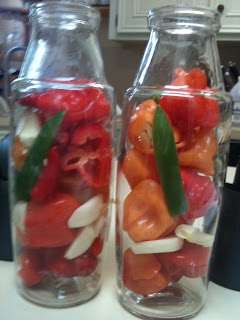 Clean the containers either in a dishwasher, by boiling them, or in super hot sudsy water (I did the latter and added a pot full of boiling water to the dish pan as the containers soaked. Rinse and dry.

Pour the vinegar into a medium sized pot. Set it on the stove.

Put on the gloves. Rinse the peppers well. Slice off the stems. Make a slit from top to bottom but leave them whole. If they will be too big to fit into the opening of the container, cut them in half, but they are prettier when left whole so consider looking for a container with a large enough opening.

Peel the garlic cloves. Leave them whole... or cut in half, but don't cut them small.

With the gloves still on, stick the peppers and garlic into the containers. Alternate colors of peppers - red, yellow, green. Add a garlic clove every now and then. Stuff those bottles full. Dispose of the gloves. Wash hands well.

Boil the vinegar. Using the funnel, pour the vinegar into the containers. Do this very mindfully as I do not want any of you to burn yourselves with boiling vinegar. Take great care, ok?

Fill only to about a quarter inch of the top. Carefully tap the bottles every now and then. This will help the vinegar get inside the peppers. You'll notice the vinegar level drop in a few minutes. Funnel in more vinegar to raise it to the same level as before. Repeat until the vinegar level stays constant.

Allow to cool. Seal and put in your pantry.

After a day or so you can start to sample. Depending on what kind of peppers you used and your tolerance to hot stuff, be very careful when you taste. A drop at a time and upward is better than a serious dosing and a flame on mouth.

24 Hours later, we had green beans for dinner. I put a teensy bit of Hot Pepper Vinegar into a bowl and we all touched a green bean to the vinegar and tasted. I used mostly habaneros in our bottle with a dashing of jalapeno, chili, and cayenne. On a scale of 1-10, the sauce was an 11 and totally delicious.


7 Days later, we had a fajita grill out for dinner. I put a teensy bit of Hot Pepper Vinegar into a bowl and we all dipped shrimp into the vinegar and tasted. On a scale of 1-10, the sauce was only a 3 with a sustained warmth that was very pleasing and a nice flavor that very much appealed.

I've seen other recipes note that the bottles should be kept out of direct sunlight and it makes sense, so do that. If at any time the vinegar looks a little cloudy or the peppers look funky, dispose of it. You probably have about a million more peppers in the freezer so just make up a new batch.

Enjoy this sauce on simple vegetables (it rocked the green beans), chili, tacos, or just about anything you want to zap with a dose of heat.
TO USE THE NEW PRINT BUTTON click on the title of the recipe so that it opens on its own page and then click the Button, you can edit the page and print only what you want

Email ThisBlogThis!Share to TwitterShare to FacebookShare to Pinterest
Labels: Sauce