Usually I make a white chili with turkey and white beans. Yesterday, I tried something different from the Barefoot Contessa - Devon's Chili. Very talented chef, and I have bookmarked her website. 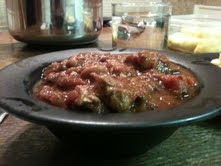 Made some minor changes - I am not a fan of green peppers and nearly went with red peppers when I discovered that it is fresh Hatch Chili season! Whenever these beauties are available the local HEB fire roasts them which makes them absolutely divine.The nice HEB roasting guy lays the blackened chili in a tortilla, adorns it with slices of white Mexican cheese, rolls and cuts it to bite sized bits for our sampling pleasure...I went back for more samples...well I had to make sure didn't I? After eating a bite or three you can only watch as you put a bag or two in your cart...along with the cheese...and the tortillas. Very interesting out of body experience.

Now, being me, I chose the spicy rather than the mild hatches. For this recipe, I was a tad dubious about a full tablespoon of cayenne powder and tablespoon of red pepper flakes rather than using some more full flavored variety and thought, hmmm, I ramped up the heat with the hatches so I'll slightly more than halve the cayenne and flakes figuring I'd add more later if I over did the reduction.

Other then that I made the recipe pretty much as directed. Unfortunately, I could not adjust the spices because I like to do that by aroma as well as taste and had managed to spill mass quantities of chili powders during the sauteing process (stove, hot burners, kitchen island, floor, bills, pen holder, wicker basket, etc). This meant that the entire kitchen and an assortment of other rooms in the house smelled rather too strongly of chili. In fact, just about everywhere I went I took the pungent aroma with me as it had settled firmly in my nose and would not be dislodged. Had to do the thing on trust.

The taste from the pot a little before serving was ok, hot but not nuanced. So I warned all that this was an experiment and apologized in advance. However, as the pot sat on the table, the flavors began to sing the same song rather than a cacophony of tunes in a variety of keys and beats. As it attained the place of honor in the bowl, the flavors continued to morph. By the time we were done eating, I was convinced that the chili was still not yet done changing and that a sitting over night in the fridge would complete the process. I'll let you know...and yes, the sitting a spell turned this excellent dish into just perfect.
TO USE THE NEW PRINT BUTTON click on the title of the recipe so that it opens on its own page and then click the Button, you can edit the page and print only what you want